Before Halle, There Was Vanessa

Most readers would readily acknowledge that Halle Berry is the prettiest African American woman around. But before there was Halle, there was Vanessa Williams. I think Vanessa's story and career are so much more exciting and eventful. Plus she got talent.

Born in March 1963, she made headlines as the first African American woman to be crowned Miss America back in 1983. Fairytale right?! Wrong, she was later forced to renounce her title after Penthouse bought and published naked photos of Vanessa. To me that is a sham. Its like giving the Nobel Prize for physics to Einstein for E=mc2, and then taking it away from him cause he posed naked for Men's Health prostrate cancer issue.

Yes, such titles may have some sort of decorum for behaviour but naked pics are not such a big thing. Its not illegal, even  if you did something illegal like kill somebody ... I doubt they would take away her title. Killing somebody is OK but nude pics are a no-no. What a pretentious Puritanical society we like to think we have - and we like to impose those stupid rules on others instead of trying to live our own lives well.

Never mind, most people in Vanessa's position would have shrivelled into a cave and hid. Not her. In 5-8 years after that she morphed into a wonderful singer with multiple number ONES.


Then she went into acting in movies such as Eraser and Dance With Me. B grade type of movies that did not really let her shine. But its television that caused her star to rise again ... After multiple lack lustre movie roles, she then captured everybody's attention as the self absorbed megalomaniac ex-supermodel Wilhelmina Slater with absolute conviction and aplomb in Ugly Betty. She got 3 Emmy nominations for that.

Trying not to say this or that is the best anymore ... taste is so subjective. However, many of you would swear that this ROJAK place is the tops. No need to argue, the queue says it all. Be early (3pm) and the queue will always be at least 5-6 people deep, be late and you will enjoy an even longer line. 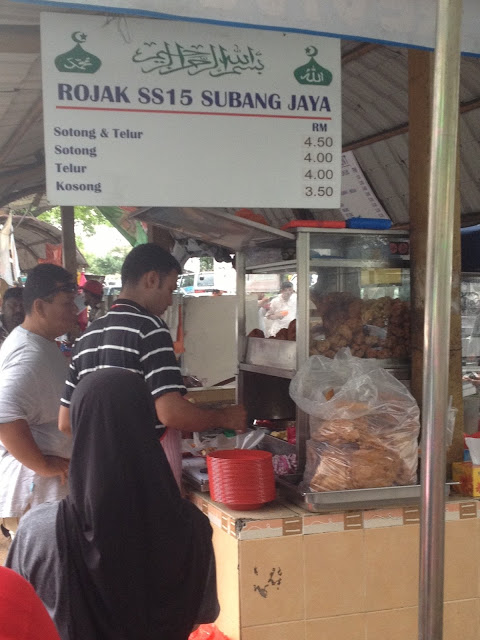 Rojak is rojak, it all comes down to the "fried stuff", how crunchy and flavoursome, and their keropok is something else ... its thin and when you dip into the sauce, its magic. The other main ingredient for a good rojak is the sauce, not too sweet with the right chilli kick. 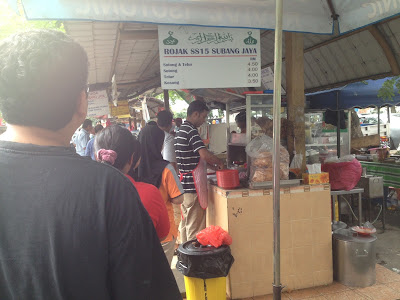 Had a special treat last night a few friends from Sarawak came over and brought a 5kg Empurau fish as well. we had it cooked at Unique Seafood SS23 and it was wonderful. Even with 13 people, we couldn't really finish the fish (as there were other dishes as well). 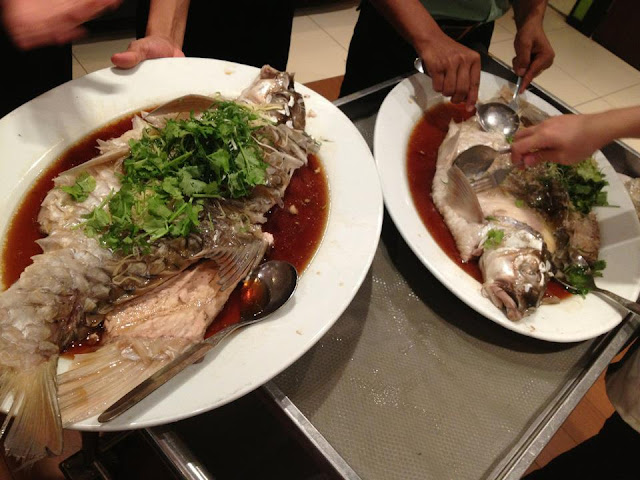 In case you were wondering, thats just one fish sliced into two. My friend got it from friends of an estate who caught it from a river. He probably got it for a couple of thousand ringgit. If Unique Seafood had an Empurau this size, they'd probably retail it at RM8,000 or more. 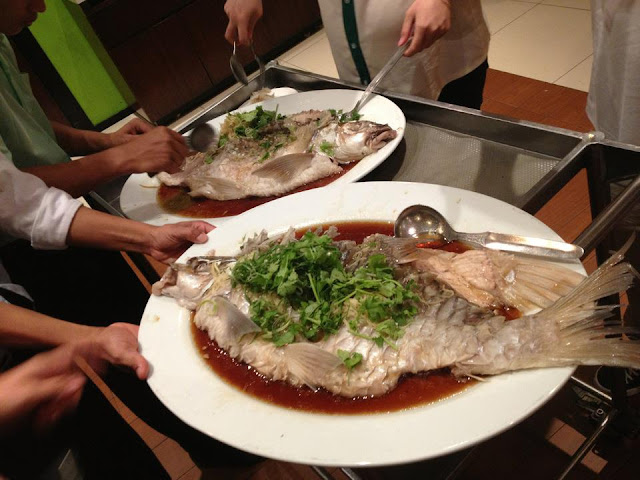 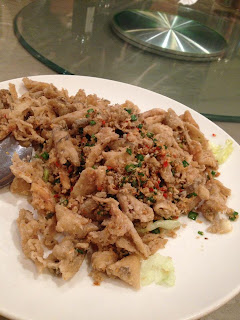 The scales were fried as probably they were too thick to be eaten off the fish being a 5kg fish. The last Empurau I had we ate the scales off the fish and they were wonderful.

FINANCEASIA: Asia’s investment banking industry has changed dramatically during the past four years. The ready supply of equity deals that once attracted banks from all around the world is now a shadow of what it once was. So far this year, equity deals have generated fewer fees for banks than advising on mergers and acquisitions, according to Dealogic.

That is quite a change. As recently as 2009, equity capital markets made up a whopping 69% of Asia’s investment banking wallet. During the bumper harvest of 2010, equity deals generated roughly $3 billion in fees, while this year Asia ECM is on target to earn around a third of that. Put simply, nobody is making any money.
Fees are down, but banks are still over-staffed for the level of activity. Everyone is chasing the same deals, which generally means that there is less to go round. The desperation is a sure sign that more cuts are on the cards. According to some, headcount may still need to come down by as much as a quarter.
“People are sitting around doing nothing,” said one senior banker last week. “The good ones are asking us when the next round of cuts is coming — they want us to do it sooner rather than later.”
The question facing Asia’s investment bank chiefs is whether today’s low level of activity is a permanent adjustment, or whether the flow of initial public offerings will one day return.

Most are betting that this is the new normal and that the years of bloated fees from China ECM deals were the anomaly. The more optimistic are even inclined to accept this as a healthy development.
“If you look at the breakdown of fees across the businesses in Asia today, it looks very similar to our business in New York,” said the banker. “It looks sustainable.”
That’s true. The fee pie is a picture of neatness — roughly one-third M&A, one-third ECM and the remaining third split evenly between debt capital markets and leveraged finance. If banks can reduce their costs and some of the less competitive players exit, as expected, the industry may return to an even keel.

The challenge is choosing where to find the savings amid the egos and personal fiefdoms of the region’s most senior bankers. With the benefit of hindsight, cutting in China rather than Southeast Asia would have been a profitable move at the start of this year because, if 2012 is indicative of the future, Asian investment banking is no longer just a China story. During the first three quarters of 2012, China accounted for less than half the Asia ex-Japan fee pool.
Yet some banks have struggled to cut their losses there, thanks in part to the years of plenty that went before. Most of the profits earned during the past few years came from China, which means there were plenty of powerful voices steering the cuts towards other parts of the business during the first round of cuts.

A lot of the over-staffing in Asia is obviously at the more junior levels. Bankers found it easy to argue for bigger teams when they were earning huge fees, and jobs were handed out liberally to many a nephew of someone or other. So there is still plenty of room to cut costs, but the next round may also see some more senior names let go as banks are forced to take some of the tough decisions that they have so far dodged.
How they manage that process could set the tone for how their business will perform during the next few years. Welcome to the new normal.

Since I am not a young ciku anymore, and since I love Indian food (southern northern whatever), I guess I have tasted quite a bit of Indian food. But its always a big danger to claim this is the best of whatever ..., because statistically we cannot make that claim till one has tried all that is out there ... and even then, there will one or two buggers who will say their mum makes it best.

So, here goes nothing and everything, the best ever chapati I have tasted (and accompanying dips and curries as well) belongs to Restoran Santa Sweet House @ Jalan Sarikei, next to Tawakal Hospital.

Chapati is such a simple thing, how to be the best? One, straight off the pan piping hot, pick your chapati straight from the pan. Two, its the thinnest chapati ever, really really thin, I don't know how the guy does it. Three, sufficiently crispy on the outside and because its thin you don't get the doughy feel at all. 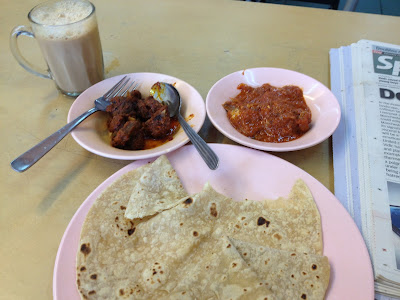 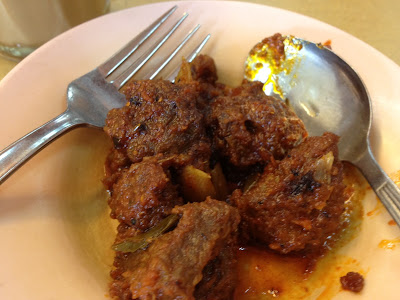 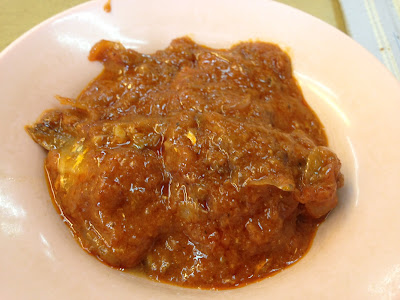 You can have it with their famous dhal or their even more famous sardine curry. The sardine curry has the right touch of spices and sweated onions that kinda pops in your mouth in a refreshing way.


The mutton curry is very very good as well.

But you know what was the best discovery ... its their teh tarik ... I can verify its the most pleasant one I ever had because they use fresh cow's milk..... OMG its that good.

I guess when the owner is a hands on guy, ultimate nice guy .... and you taste the chapati, ....  if one can ensure that the simplest thing on their menu is already so damn good, you can bet that the rest would be deserving of equal grand treatment under the auspices of the owner.

Must try everything, the gulab jamun and osen chicken sambal are divine as well.

Yes, too good to be true, so many wonderful stuff all under one roof. Plus its a very muhibbah place too, all Malaysians once having taken their seats nod knowingly to one another, ...  that "hey, so we are dining at the best place money can buy of chapati and curries" look.

Chart Of The Day

We all know what Microsoft stands for, milking the one main product which wasn't really theirs to start off with forever ... well, the end is near. Apple which nearly collapsed many times till Steve Jobs returned to the fold, is now officially the most valuable company in the world, surpassing Microsoft two years ago and has never looked back.

As of yesterday, another behemoth has gone past Microsoft, Google.

What a novel idea... the supposedly latest share margin valuation prices for glove stocks MAY actually present itself as a ready-easy targ... 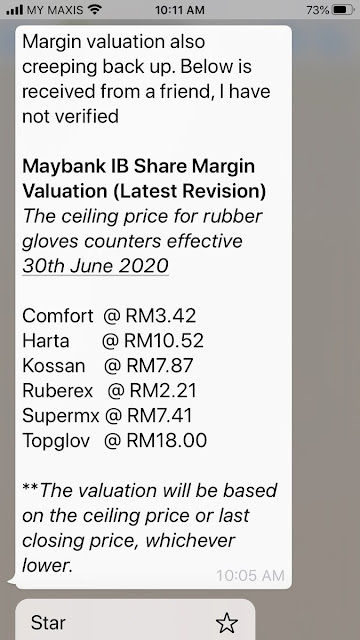