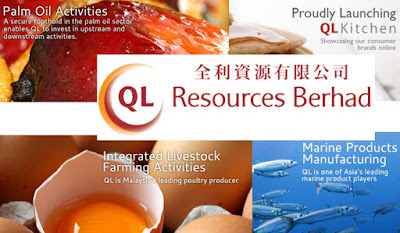 CAVEAT:  This is entirely MY OWN VIEW, I could be wrong here. It is mainly conjecture on my part.

It has been said when you wish to emulate someone, learn from the best. QL Resources, a shining star in terms of stock price performance for the last 15 years, did very well again in 2018 in spite of trying conditions.

QL was founded in 1987, but its roots stretch back to the late 1970s. In those early years, Dr Chia Song Kun and his brothers harvested the calcium-infused shells of dead mollusks from a remote shoreline near their home village, which they supplied to local feed millers. The hard-fought success of this modest business allowed them to expand their product range and open new branches across Malaysia.


QL’s strategy involves the deployment of technology, capital and management expertise into populous emerging markets. Despite new market challenges and geopolitical risks, regional expansion in adjacent ASEAN markets is fuelling QL’s medium and long-term growth.
Dr Chia and his team pursue a strategy of strengthening and additional integration of QL’s value chain. This provides the company with more opportunities to add value, multiplies its ability to generate profit, increases efficiency, mitigates the business cycle risk that often affects singular parts of a value chain, and ultimately ensures consistent quality in the final product. Greater competitive advantages are held over businesses in any one segment of the chain as a result. 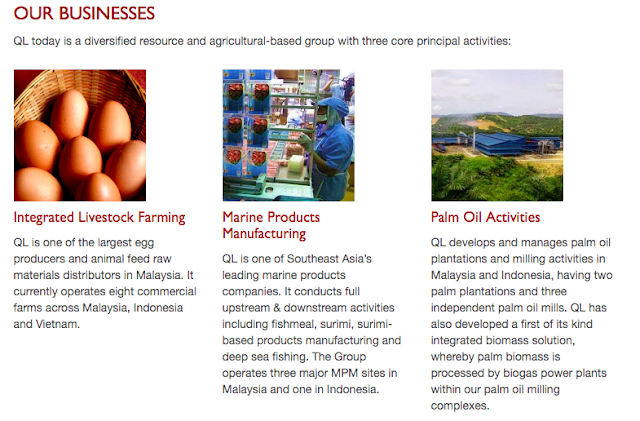 QL’s marine products manufacturing division is the fastest-growing among its three business divisions. It is involved in deep-sea fishing, aquaculture farming, surimi and fishmeal productions. Presently, QL is the largest surimi producer in Asia. Over the last 10 years, QL has achieved a CAGR of 13.59% in revenues for this division. It has grown from RM245.4 million in 2007 to RM877.1 million in 2017.

QL’s livestock farming division remains the biggest revenue contributor to the group. It has grown as a result of organic growth and a series of acquisitions. In 2007, this division was producing 1.5 million eggs a day. In 2017, QL produces 4.6 million eggs a day. It also produces 40 million day-old chicks (DOC) and 20 million broilers and trades over 1 million metric tonnes of animal feed raw materials a year. Over the last 10 years, QL has achieved a CAGR of 10.50% in revenues for this division. It has grown steadily from RM657.2 million in 2007 to RM1.78 billion in 2017.

QL has achieved a CAGR of 14.04% in dividend payouts to its shareholders over the last 10 years. It has increased from RM14.3 million in 2007 to RM53.0 million in 2017. QL has maintained an average dividend payout ratio of 24.51% over the last 10 years. For the financial year ended 31 March 2017, QL declared 7.25 sen in dividend per share. It comprised 3.00 sen in special dividend and a final single-tier dividend of 4.25 sen. The special dividend is one-off and declared as a token of appreciation to reward its loyal shareholders. As at 4 September 2017, QL Resources share price is trading at RM4.82 a share. Excluding the special dividend, if QL is able to maintain its final single-tier dividend of 4.25 sen for the financial year 2018, its expected dividend yield is 0.88%.

As of May 2019, FamilyMart Malaysia opens its' 100th store in Melaka, earmarks to open another 50 stores in FY19 towards their FY22 target of 300 stores. While operations are not expected to break even in FY19, management expects the store chain to become profitable in FY20 from an expected store base of around 120 branches.


Today QL has a coherent, complementary set of businesses with a combined objective: to add value to our broad, resource-based Group.

So which company did Dr Chia Song Kun patterned (emulated)  after? This is entirely MY OWN VIEW, I could be wrong here. It is mainly conjecture on my part.  Coincidentally, or not, it was after another Chia family... but from Thailand. I think it was more than coincidence that both have the same surnames. 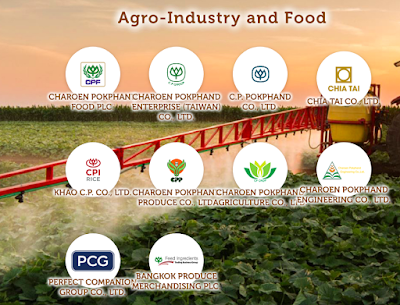 To be fair, QL after making great inroads into the agro-farming, livestock feed, marine farming... did venture into something big which CP did not have a natural advantage, i.e. palm oil. The Family Mart venture puts QL back on the CP treasure map (CP own's the 7-11 franchise for Thailand, the best performing of all 7-11 franchises globally).

Key Dates:
1921: Chia Brothers, from China, set up a seed shop in Bangkok's Chinatown, then begin exporting poultry and pigs to Hong Kong.
1954: The company diversifies into animal feed production and launches a subsidiary, Charoen Pokphand Feedmill.
1964: Dhanin Chearavanont, son of one of the founders, takes over as company leader.
1970: The company launches a poultry breeding business in partnership with Arbor Acres of the United States.
1973: The company begins exporting poultry to Japan and becomes one of that market's leaders.
1979: The company becomes the first foreign firm to invest in the Chinese market, opening a feed subsidiary in the Shenzhen economic trade zone.
1986: The company diversifies into shrimp production and becomes the world's leader in this market.
1994: Lotus Supercenter retail network is launched in Thailand.
1998: The company restructures as a "focused" agribusiness.
2003: Dhanin Chearavanont is named one of Fortune magazine's "World's Most Powerful Business Leaders."

This post is in no way to dilute Dr. Chia's business ability, rather, it is to highlight how an academic can parlay his book knowledge (case studies and research papers) with great entrepreneurship to bring about great businesses.

I am a great admirer of Dr. Chia. I would use the words "emulated" or "patterned" and NOT "copied", when referring to QL's achievements. I think Dr. Chia is easily Malaysia's best business person for the past 50 years.

We all want to learn from the best. We buy good books on business, we pay for solid business centric magazines and papers - just to improve our knowledge and hopefully learn more about business insights and strategies. Dr. Chia is a fine example of learning from the best, parlaying his astute business knowledge, and executing very well.


CP In Everything Now

Just how much more can QL grow? Well, QL has managed to replicate CP's top two businesses: Agro-Industry/Food and Retail/Distribution. That has taken a lot of effort for QL. We have to remember CP is so much bigger than QL because of its early mover advantage and a domestic population that is almost 3x the size of Malaysia. 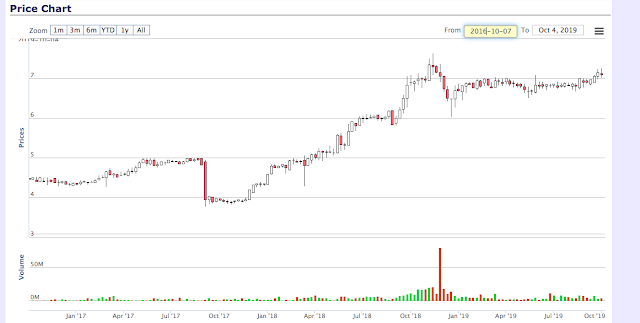 Is QL Still Attractive As A Stock

Definitely yes. Just have a look at its long term share price chart. One caveat though, I think some investors have been too exuberant over the Family Mart business and has pushed its near term valuations on the high side. If I had been holding QL for more than 5 years, I would sell 2/3 at current valuations if not all BUT would definitely look to buyback when earnings start its next wave 0 when Family Marts shows better cash flows. Now Family Mart is in its capital expenditure phase.

I had been a QL shareholder since the late 1990s but have sold more than 80% of my shareholdings (including all the Bonus shares received from its Bonus Issue and Share Split) due to valuation.

When I attended their AGM 15-16 years ago, QL were less covered by investors and I managed to speak personally to the Chia brothers and senior management on a one-to-one basis including Dr. Chia himself.

From those conversation, I found out that one of the key success factor of its strong foundation in its 3 key business is their very hands-on approach in managing the business. All their key businesses in Hutan Melintang, Sabah and Johor have specific Executive Directors who lived there and manage the business on a daily basis. This together with the strong control by Dr Chia at the HQ enabled their 3 key business especially the fish meal/surimi business to grow exponentially.

There other key success factor is their focus on their strength and only expand their business where there is synergy. For e.g. when the raw material for their surimi faced supply problem, they went upstream and invested in modern fishing boats to obtain more secured supplies for their surimi factories. 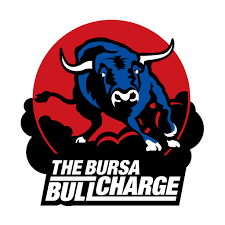